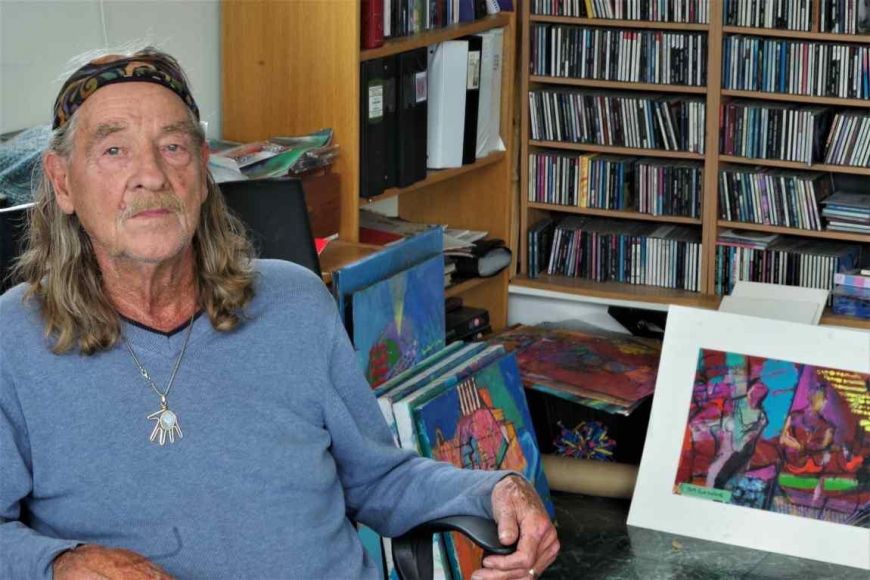 Many years ago I encountered Graham Metson, at an exhibition of his works at Oeno Galley. As was common at the time, when public gatherings could be held with confidence, he was delivering the artist’s talk. Whilst I do not remember everything he said, one particularly striking statement stuck in my memory. I believe it was something like this, “So I got divorced, bought a Rolls Royce and booked passage on the QE2 and set sail to the United States.” It was the kind of sentence that summed up the spirit of the times, and it was in eerie fulfillment of childhood gypsy prophecy.* It was a time when anything and everything seemed possible, a time when eccentricity seemed quite normal, a time of considerable excitement: the mid sixties. Performance art began to be performed and happenings were starting to happen. Pop art was popping.

At the time, and particularly from the perspective of a child growing up in the Blitz, enduring war time privations, and post war time austerity, America was perceived to be an exiting new world free of traditional restrictions, a brash, confident world of movies, comic books, cartoons, extravagant motor cars and the latest developments in painting. The attraction was obvious. Crisscrossing the United States in a whirlwind of educational positions and exhibitions, Metson was discovered by Canada, most particularly the Nova Scotia College of Art and Design, where he was invited to accept a position as a lecturer in 1972. Concordia University lured him away in 1986, where he remained for eighteen years. Always one to keep busy, he also acted as head of the summer art program at Banff Centre for the Visual Arts. Those mysterious forces that emanate from Prince Edward County that have attracted so many painters to relocate here, somehow insinuated themselves in to the Metson psyche, instigating a move to The County in 2003, where he remains to this day.

Now 87, Graham has acquired a few mobility issues, but his mind is still sharp as a tack, and he still works most days, and continues to move forward, not just rehashing former glories, as is unfortunately typical of many older artists. Motivated perhaps by his grandmother’s motto, “There’s plenty of time to rest when you’re dead,” the studio betrays his continuing industry, far from chaotic, but nowhere close to tidy...works on paper litter the floor and climb up the walls. Graham says, “I prefer acrylics these days, because the results are sharper than oils which I find are more muted.”

Characterized by recognizable figurative suggestions, the works frequently present sharply delineated motifs in strong colours, floating against diffuse pastel coloured atmospheric backgrounds, often occupying the blue-green end of the spectrum. Figurative motifs are animated with seemingly cartoon influenced “action lines,” drawn directly on the canvas straight from the paint tube. Never, has he abandoned the human figure, but neither is he bound by it. Colours are rich, but deep and muted, masking unappreciated draftsmanship. Though inviting examination, the works do not scream for attention. One suspects there is a subtle debt to futurism, the early twentieth century art movement focusing on dynamism and energy. “When I start a painting, I do not know where it will go, I just follow it, I have no desire to paint things I have seen, I am looking to paint things I have not seen.”

Reading Graham’s self-penned memoir of his childhood is quite revealing. It details an idyllic contented cozy working class childhood full of the warmth of coal fires, loving parents, cats, whistling kettles, pipe smoking grandfathers, and the sound of music on the radio, all suddenly fragmented by the outbreak of World War Two. Now, Graham comments, “The only certainty in life is change,” and I would think it a plausible explanation that the sensation of motion pervading the works, might reflect this fragmentation that occurred in his life.

At the outbreak of the war, his father volunteered joining the Royal Air Force. His mother found a new position in central London, leaving Graham to spend a lot of time with his grandparents. Perhaps this caused the young boy some anxiety, although it may have provided some opportunities away from parental supervision.

At school, Metson documents learning to write and records the transition from pencils or chalk on slate, to pens with shiny silver nibs on paper. For an emerging artist this could have been a seminal introduction to mark making. Significantly, he was so annoyed with himself for dropping ink on his book, that he carefully excised the first page. Unfortunately, his favourite teacher was killed by an exploding bomb. However, there was a silver lining in a sense, as the replacement teacher introduced him to painting, providing paper and paints and the task of illustrating a poem. His memoir recalls the school blackboard, and the diffuse wavy marks left by the blackboard rubber. I find this significant, maybe Metson’s mark making against a diffuse background stems from these early influences? As a child he had a well developed interest in the images that appeared in Life Magazine, Picture Post and the daily newspapers, which frequently represented unpalatable aspects of the war’s progress. Witnessing the corpse of women who had been blown to pieces, quite casually on his way to school, he came to realize “that we are all just meat.” He imagined a chart for cutting up a human body, rather like the diagram one might see in a butcher’s shop. Later, in a bomb crater, he would find an academic text book concerning neurology, full of diagrams, some of which he tried to copy. An unfortunate incident caused his father to be sent home on sick leave with what we would now call PTSD, his father witnessed a disoriented, possibly wounded pilot, wander into the propeller of the airplane from which he had just dismounted.

The memoir is full of references betraying an acute sensitivity to the differing qualities and intensities of light, shadows, reflections, mirror images, exploding gas or water mains, spiders’ webs of search lights, moon light reflecting in puddles or rivers and atmospheric effects occasioned by smoke, fires, fog or the dust swept up by explosions. Light permeating such atmospheric effects has been meat and drink to artists for centuries, think of Turner and Eruption of Vesuvius.

Typical themes in Metson’s oeuvre address music, musicians and dancing. Permeated by references to music in one way or another, his memoir catalogues wind up gramophone’s, crystal radios sets, pianos either in homes or in the pub, singing, and visits to jazz clubs. And let’s not forget his sometime neighbours, Pink Floyd, Soft Machine and T. Rex. Metson was also a very keen dancer, and due to a connection of his mother’s he obtained a stipend from the U. S. Embassy to teach young Americans to Jive. The once radical waltz was in decline, exiting new music was being made in America and the UK, people were becoming acquainted with Rock ‘n Roll... “the music of the jungle,” as Liberal MP, Jeremy Thorpe, famously called it. Music and painting are of course closely related. Graham likens the act of painting to “a jazz musician who takes a theme and improvises around that theme.”

Perhaps animation...figures in motion are the attraction as the antithesis to death and destruction. Dancing, has been described as the prelude to sex, and sex leads to new life. There may be no specific and direct references to the war in Metson’s imagery, in comparison to the works of British painters, Paul Nash or Graham Sutherland, or Canadians, Alex Colville, Lawren Harris and Charles Comfort. I sense a feeling of expansion in the works, as if they cannot be contained within the frame, akin to an explosion. Past exhibitions have been entitled Immolation, and Memories and Testimonies. It remains hard to imagine these childhood war time experiences did not influence his output.

From October 7 to November 7 a show of Graham Metson’s work will be on show at Hatch Gallery in Bloomfield. hatchgallerypec.com